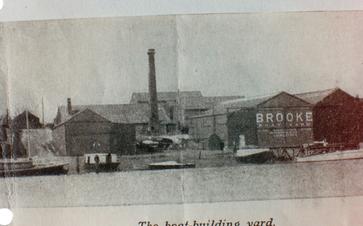 MB436 was commissioned by the Admiralty to J. W. Brooke & Co, Ltd., Oulton Broad, Norfolk . The order was placed on 27 January 1915 under Admiralty order CP75332/14 which covered a number of similar craft:

HMS Calliope to serve as a fast motor launch. Later

the same year she was  transferred over to
HMS Royalist when Capt. Mead transferred
​command from Calliope to Royalist in August 2015

that fought at the battle of Jutland. In March 1915

she joined the 4th Light Cruiser Squadron of the

Grand Fleet. It was in that role that she took part

in the battle of Jutland, forming part of the screen

that protected the battle squadrons as they

steamed south towards the battle. She then took

as her squadron was the only Light Cruiser

Squadron to have kept in her battle position.

Later on she launched a torpedo at German capital ships, identified as either the pre-dreadnaught battleships or the battlecruisers.

In August 1916 Admiral Jellicoe was absent from the Grand Fleet, recovering from an illness in southern Scotland. The Royalist was the cruiser chosen to wait for him at Dundee, in case the German fleet came out. On 18 August the Germans did indeed make a sortie, and the Grand Fleet put to sea without Jellicoe. He made his way to the Royalist, and was taken to the Iron Duke, to take over command of the fleet. On transferring over from the Royalist to Iron Duke we believe Jellicoe may have used MB436, however its pretty difficult to prove!

In February 1917 HMS Royalist converted to carry 74 mines and joined the 1st Light Cruiser Squadron. She was the most prolific minelayer of her class, laying 1,183 mines in 16 trips. Late in the war HMS Royalist was significantly modified, gaining twin 3in anti-aircraft guns, a kite balloon and having her two rear 4in guns replaced with one 6in gun.

HMS Royalist spent four months in the Baltic (January-April 1919), then spend the rest of the year with the 2nd Light Cruiser Squadron at Harwich. In January 1920 she joined the Portsmouth Reserve.

Probably capable of 30 knots. Plus a bit!

Decommissioned in 1919 and moved to the Rosyth dockyard. Sold into private ownership in 1923.