The owners Great Grandfather was Alexander Gardiner Smith (Born 1875- Died May 31, 1916) was a Stoker on HMS Queen Mary at the Battle of Jutland. More details here

Atta Boy can be seen on the Thames at many events throughout the year. We try to get to as many as we can. Atta Boy was involved in the Queens Jubilee Thames river Regatta where she was one of the 1000 boats in the flotilla

Launched in 1915 and saw action on HMS Royalist, Battle of Jutland 1916 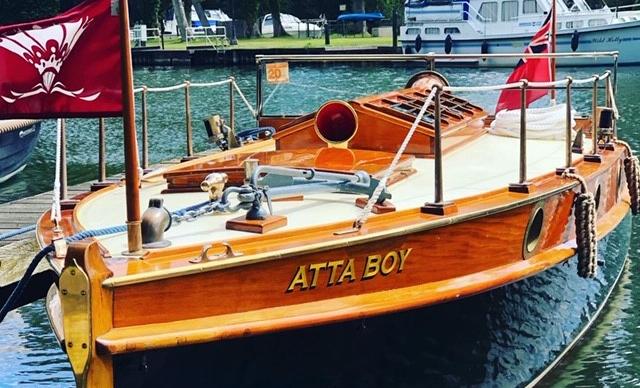 Atta Boy or to give her her real name MB436 is one of the last surviving craft from the First World War. Built in 1915 for the Admiralty as a fast motor launch she was attached to HMS Royalist and was on board at the Battle of Jutland in 1916. Click here for details

MB436 or ATTA BOY  as she is more commonly known is a very special boat. She is probably the last of her kind. One of the first boats commissioned by the Royal Navy with a petrol engine (now gone sadly) as a fast motor launch for battleships to transfer captains from ship to ship.
MB436 was commissioned by the Admiralty to J. W. Brooke & Co, Ltd., Oulton Broad, Norfolk. The order was placed on 27 January 1915 under Admiralty order CP75332/14 which comissioned 5 x 30ft launches.  A further 7 were ordered. MB436 was despatched on 10 August 1915 to HMS Calliope to serve as a fast motor launch or Captains Pinnace. Later the same year she was transferred over to to HMS Royalist.
In such a capacity she may (yet to be proven but possible) she moved Admiral Jellicoe, Commander of the Great Fleet from HMS Royalist to HMS Iron Duke in August 1916 when the enemy emerged into the North Sea for the last time during WW1.
HMS Royalist was an Arethusa class light cruiser that fought at the battle of Jutland. In March 1915 she joined the 4th Light Cruiser Squadron of the Grand Fleet. It was in that role that she took part in the battle of Jutland in 1916
ATTA BOY now resides on the river thames in Marlow, Buckinghamshire. But we believe she should be used and enjoyed and not sit in a museum. But. as she is over 100 years old we do treat her with respect and lots of maintenance! You can also enjoy cruising on Atta Boy as she is available for private charter on selected days throughout the year. Please contact us.